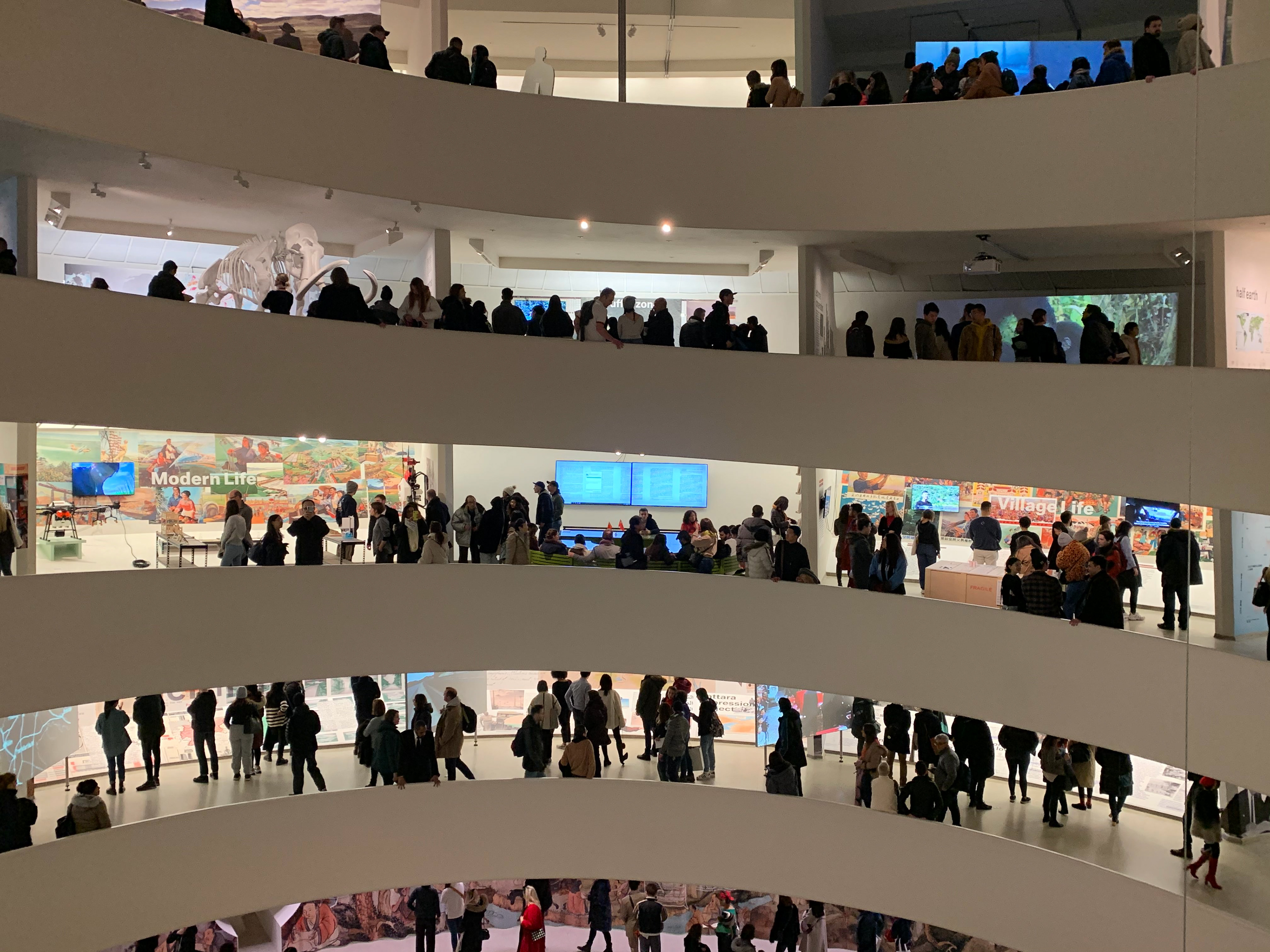 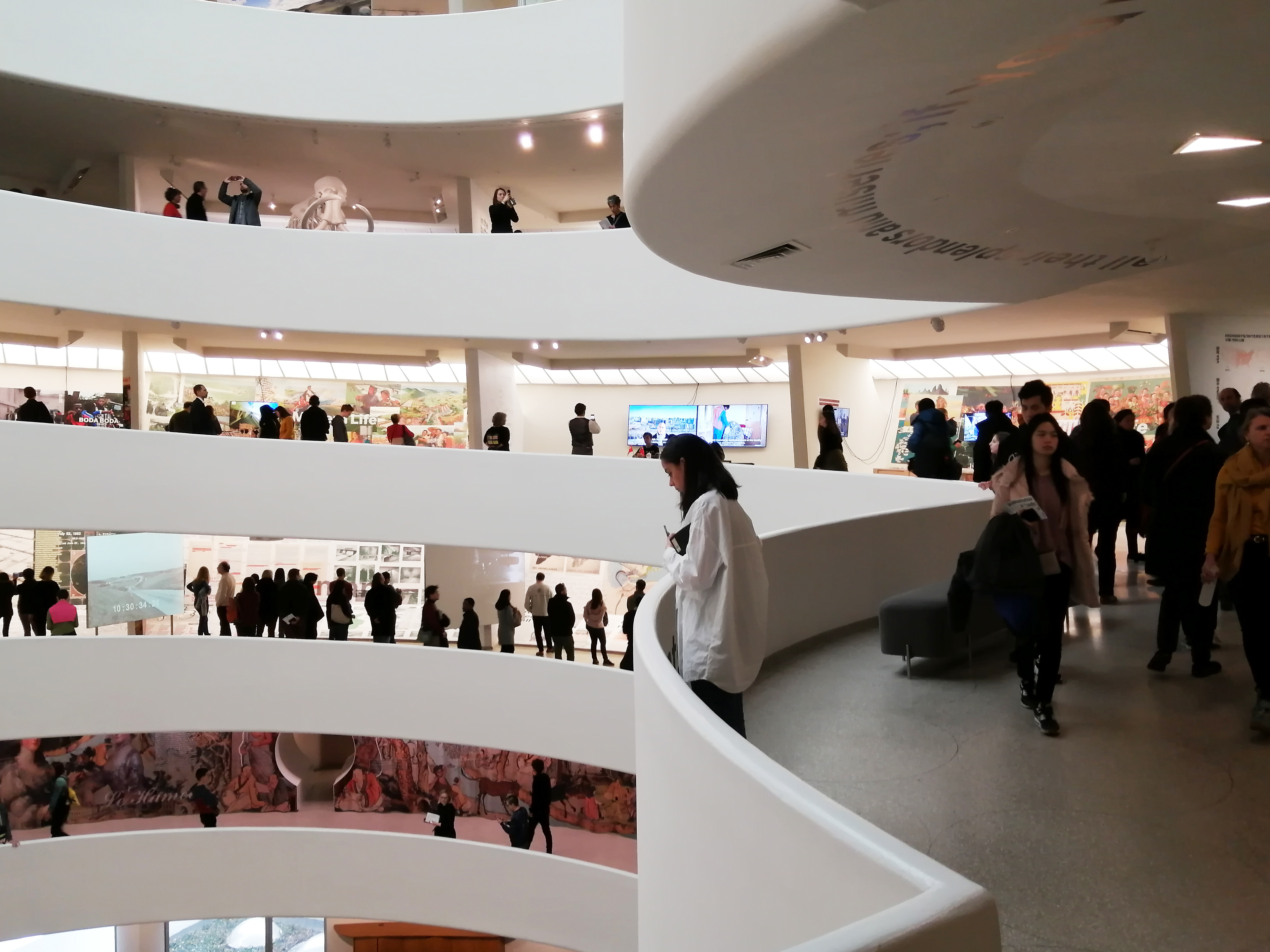 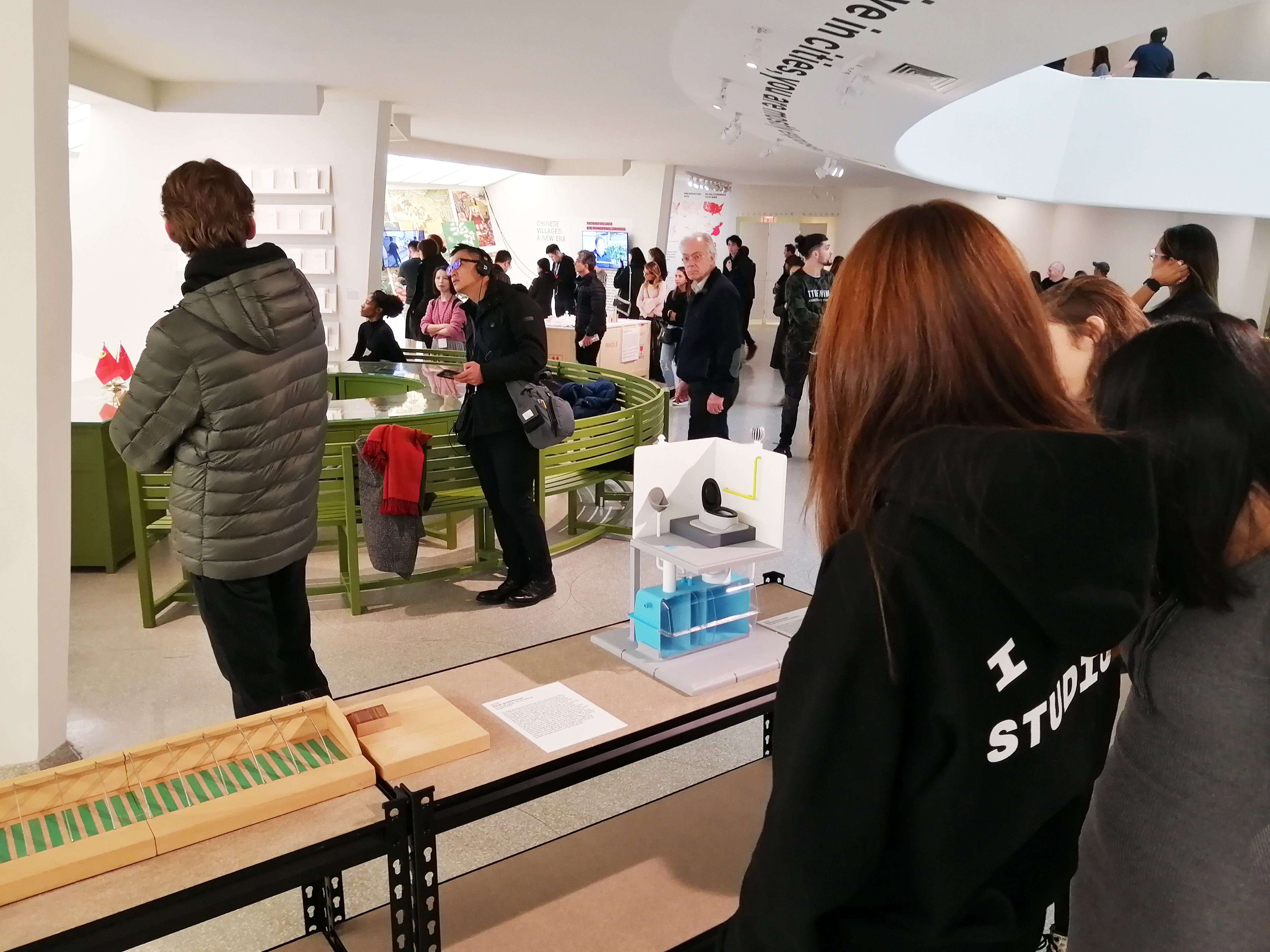 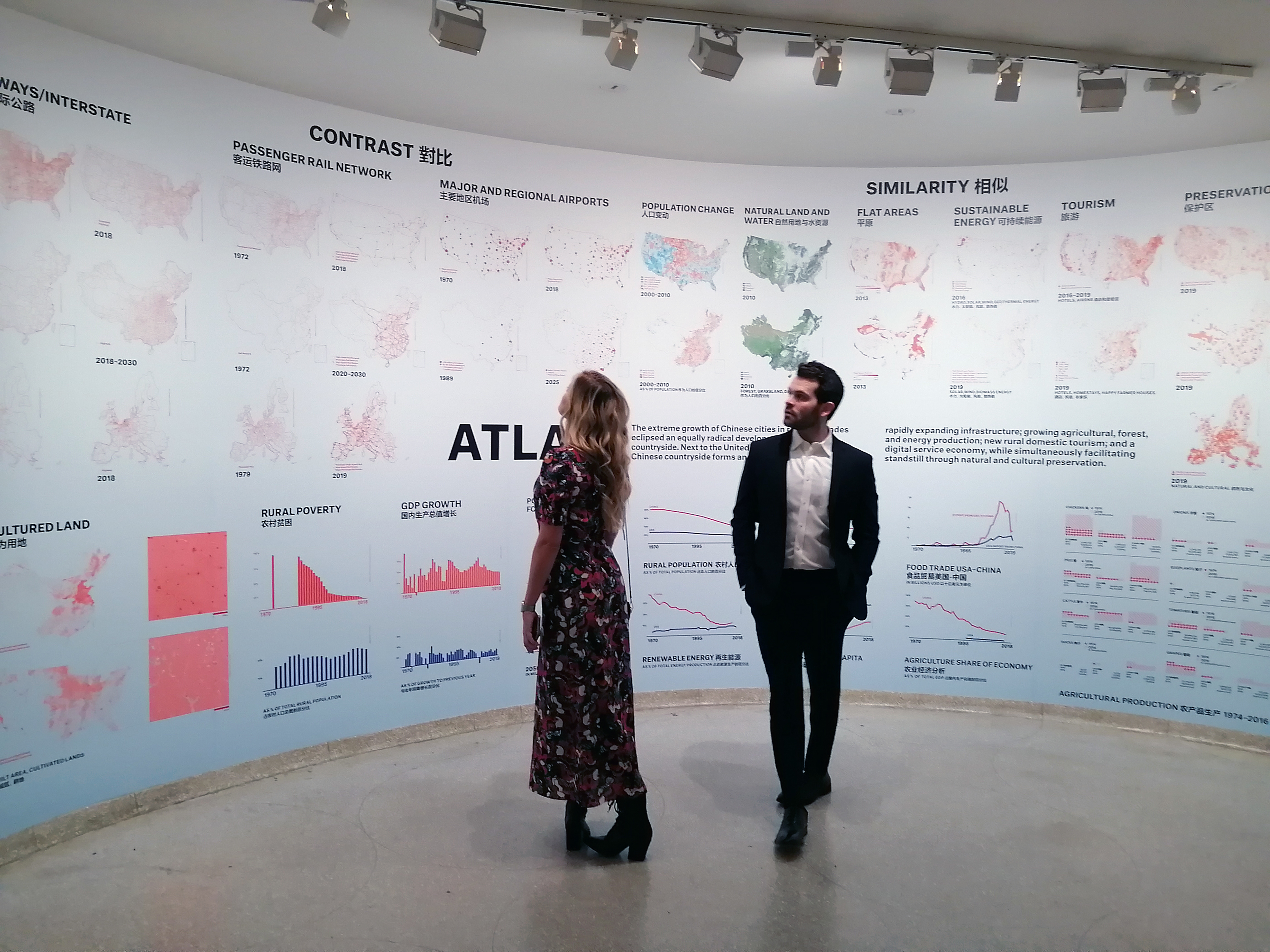 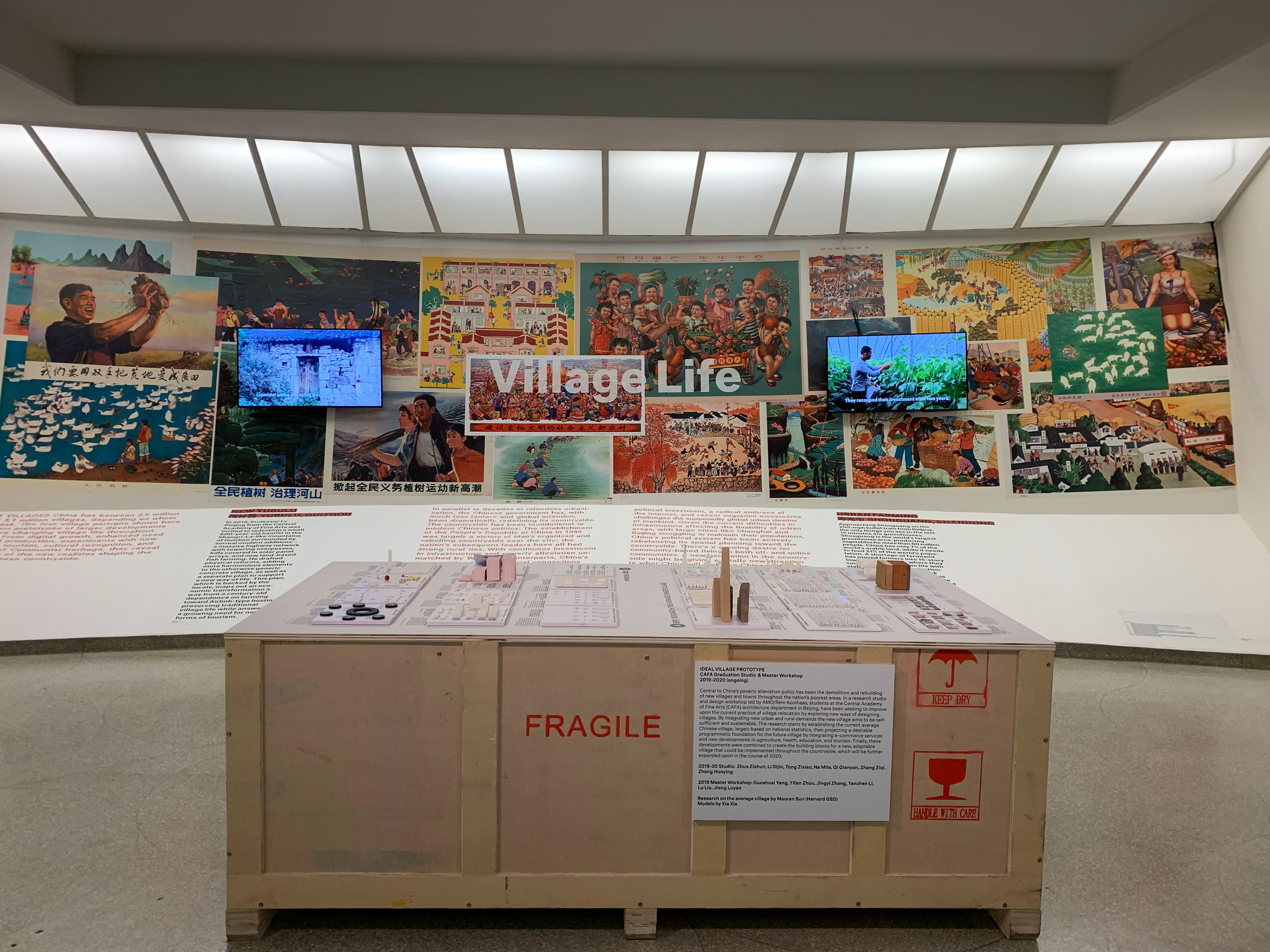 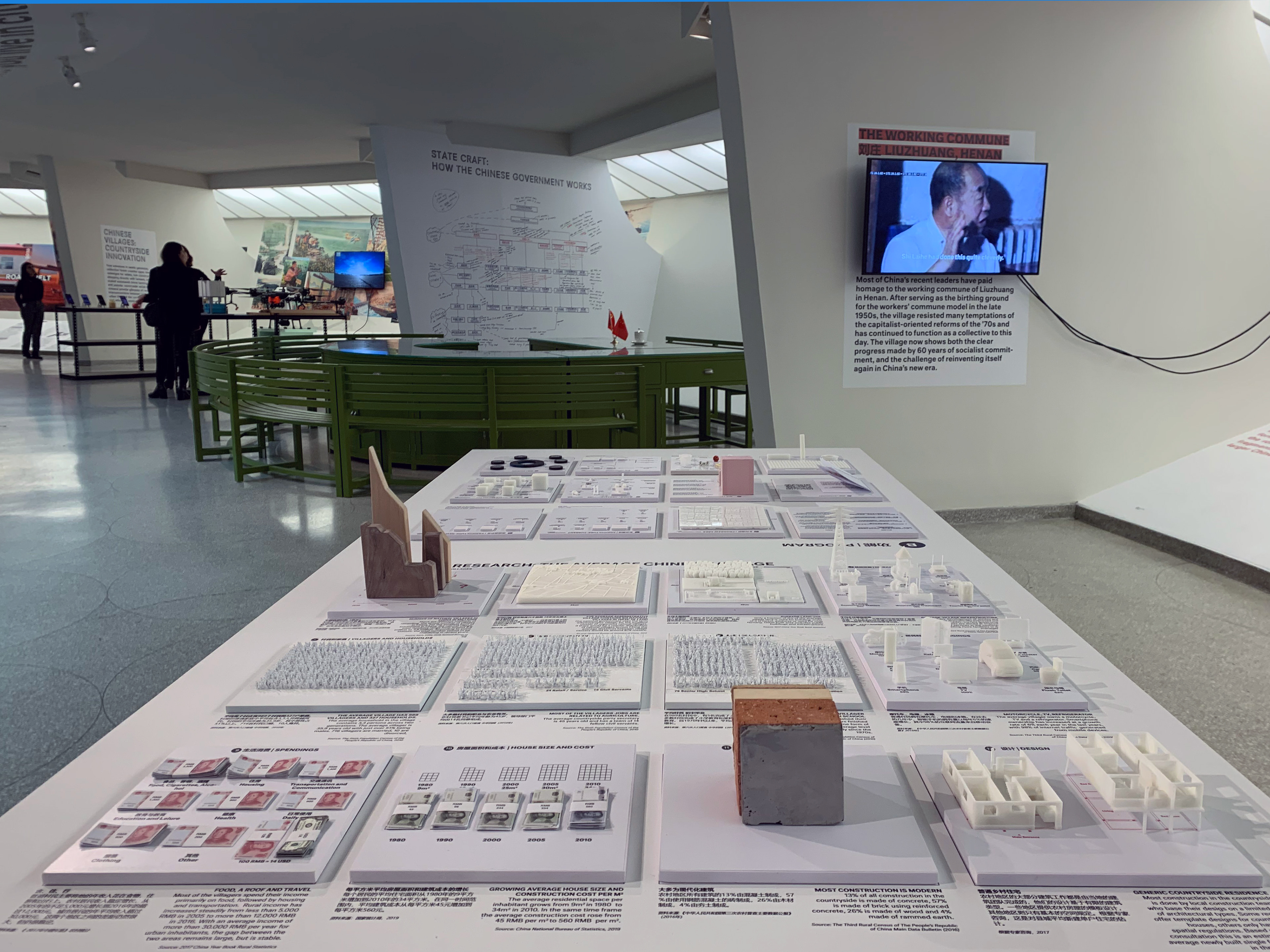 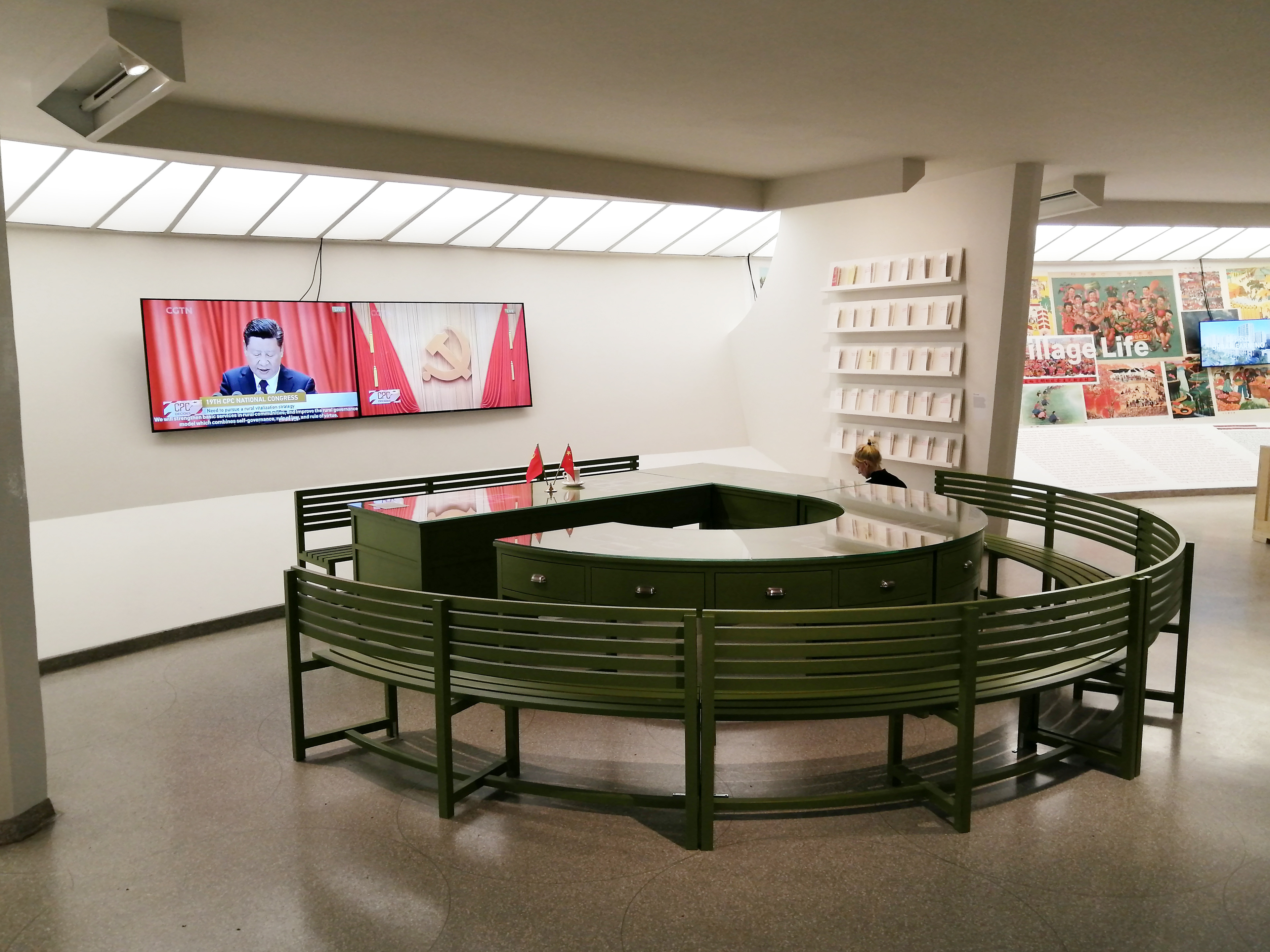 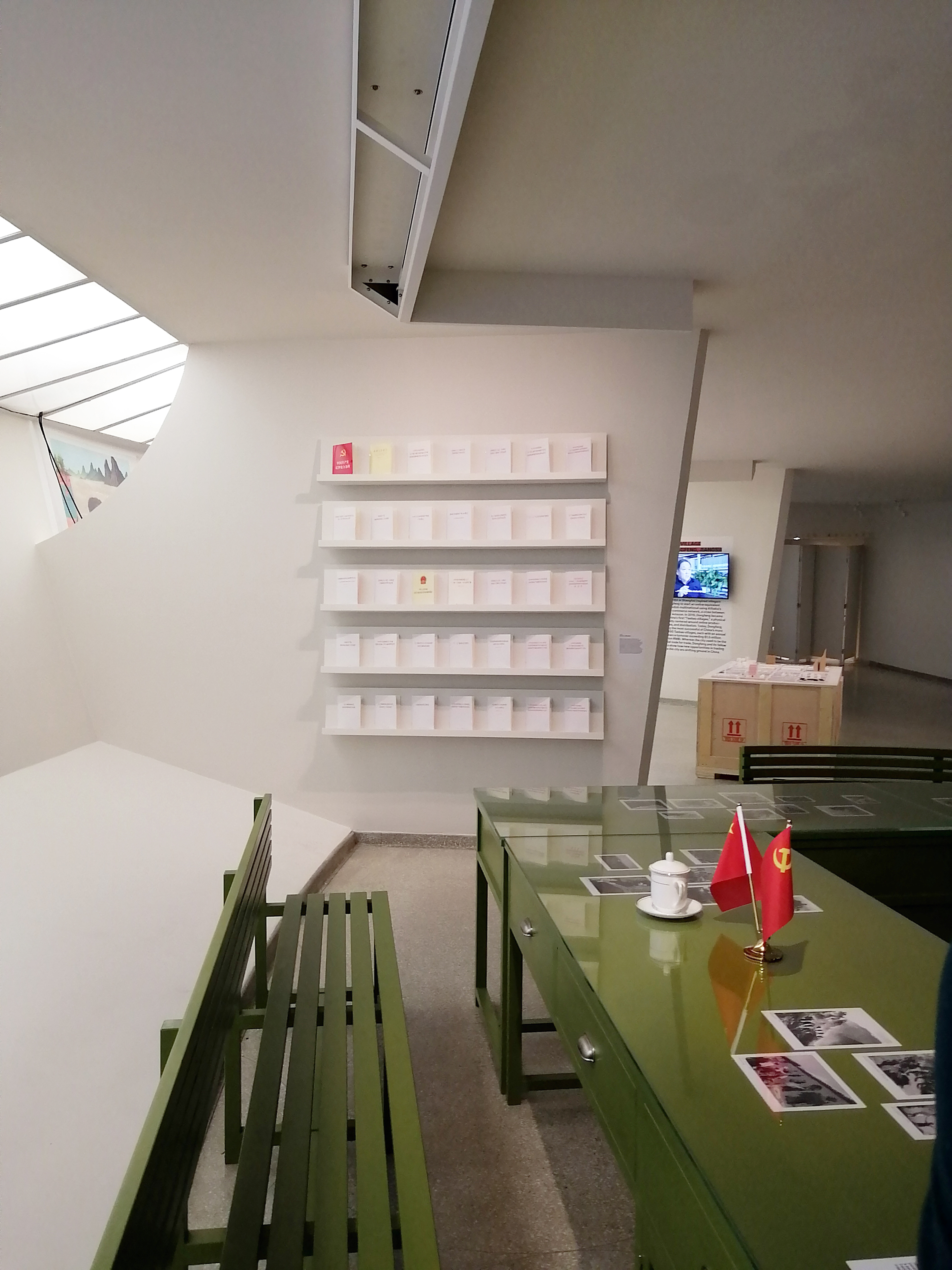 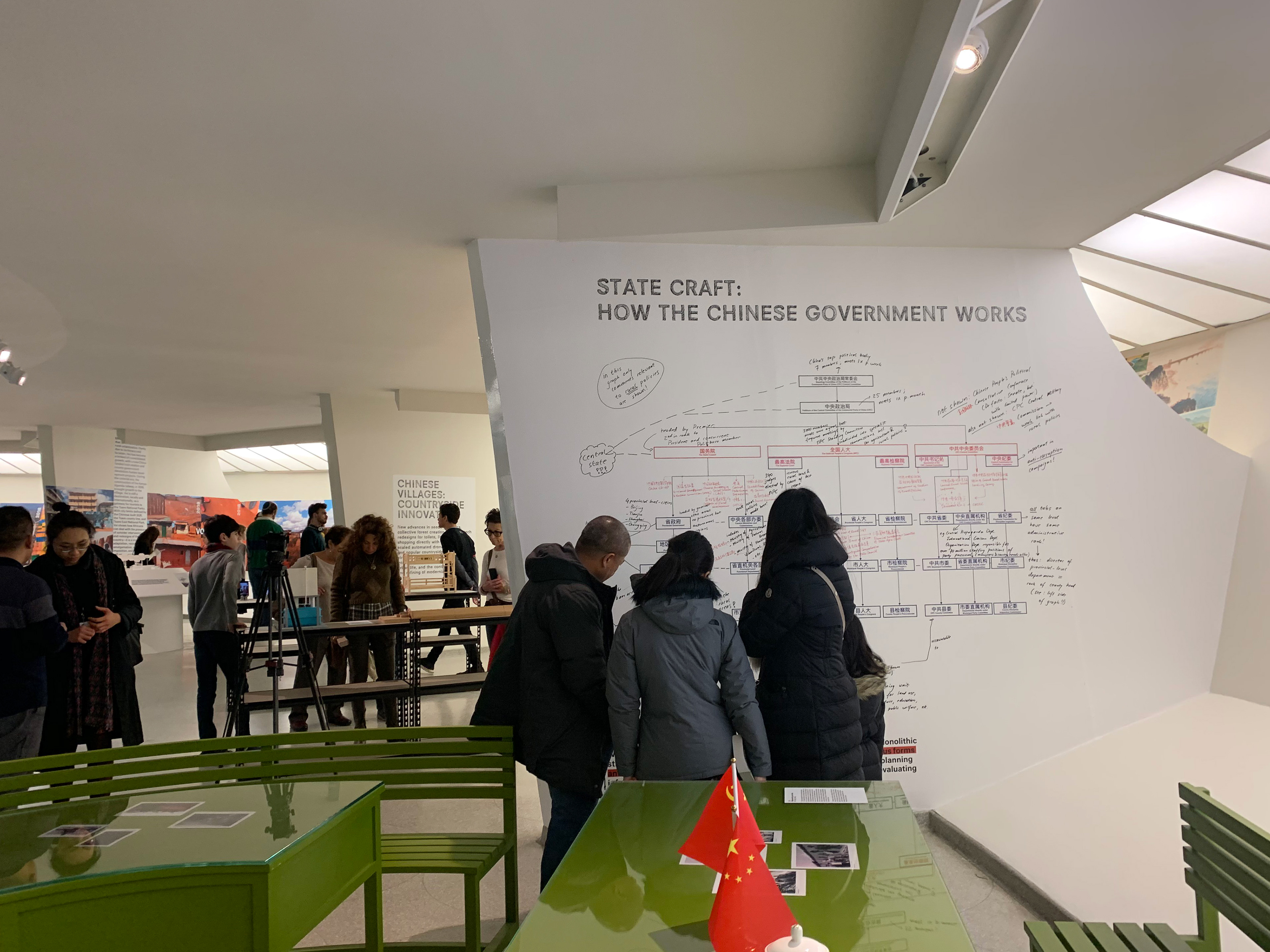 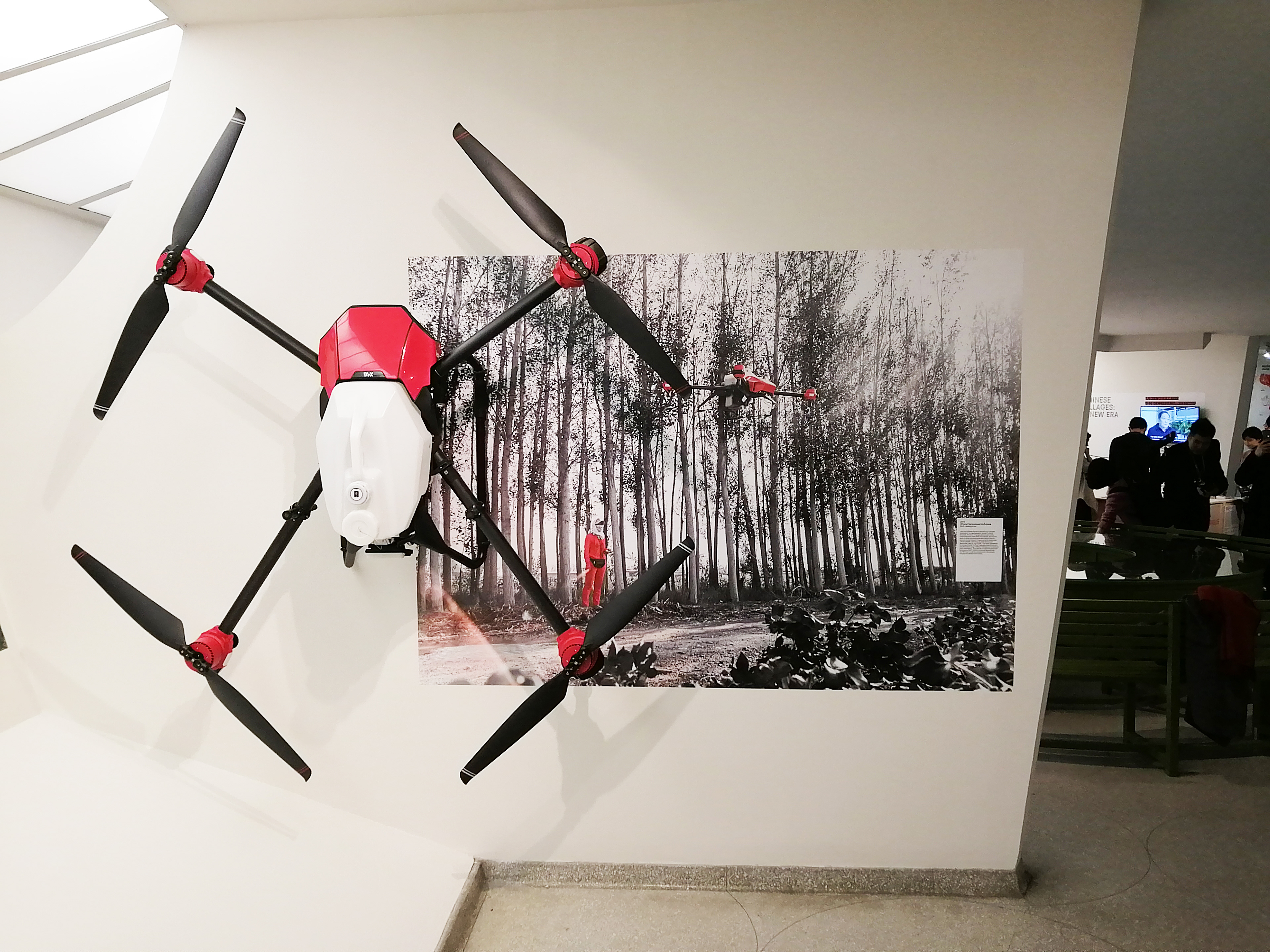 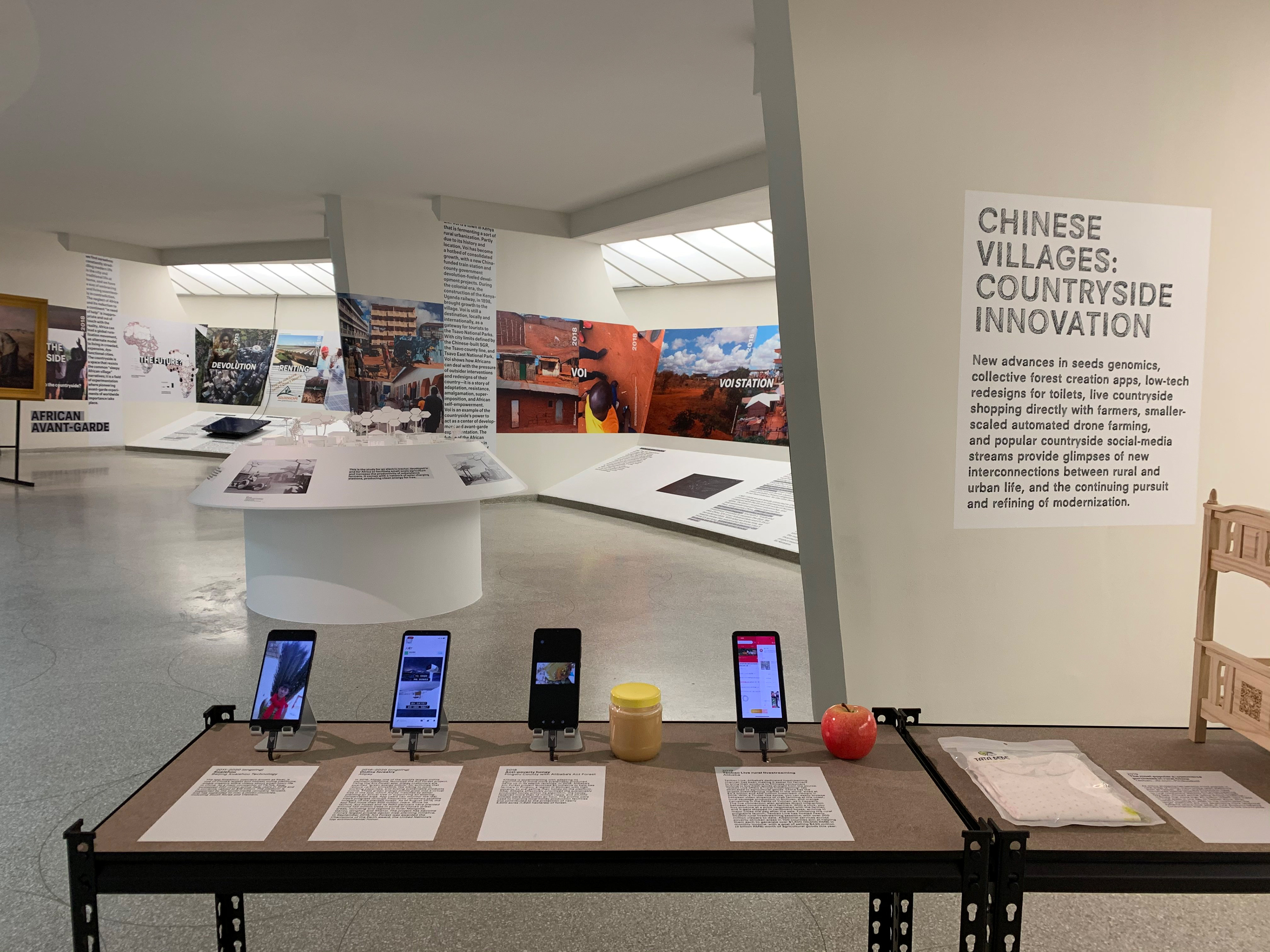 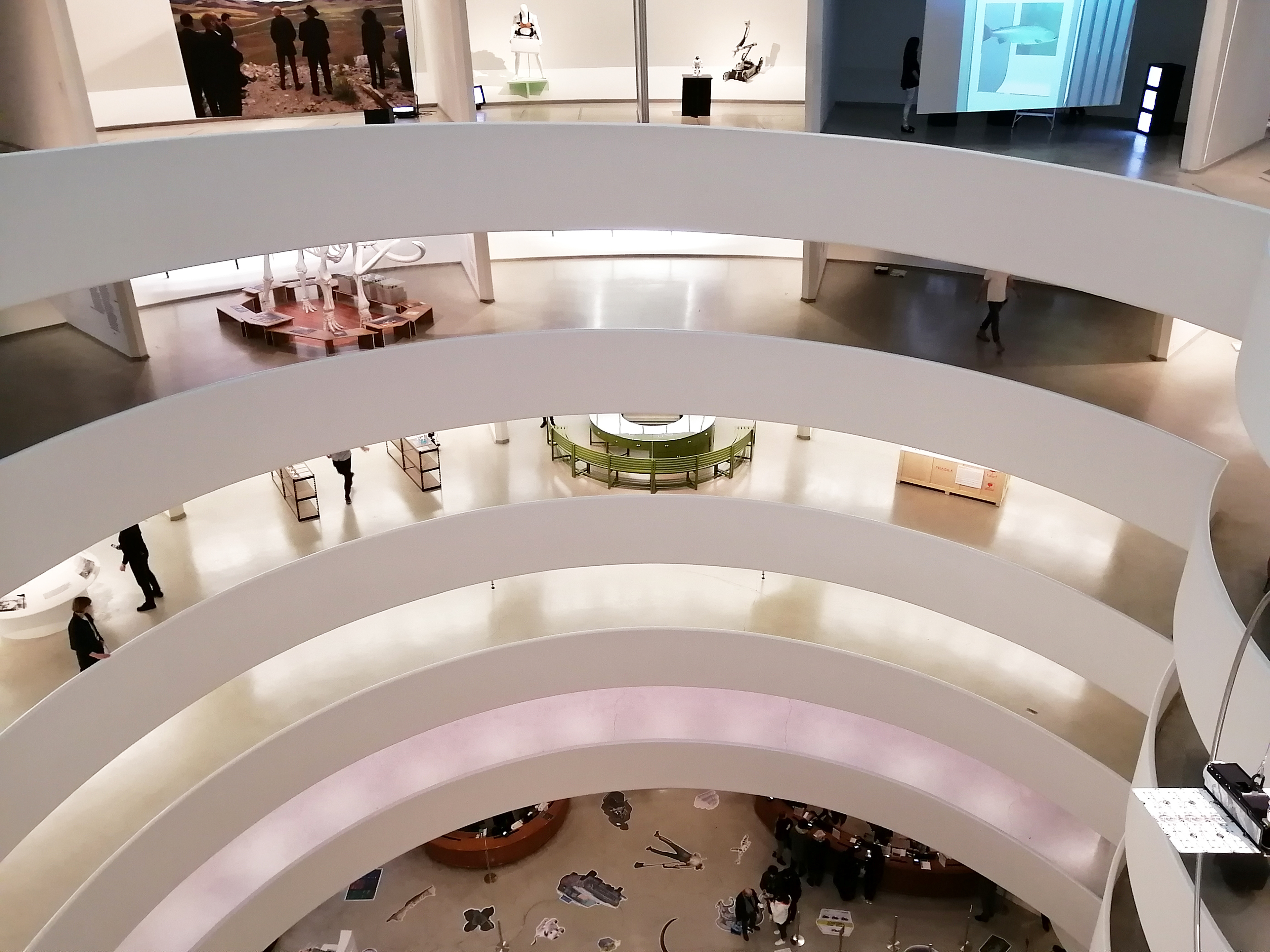 In parallel to decades of relentless urbanization, the Chinese government has been dramatically redefining its countryside. With continuous investment in infrastructure and poverty alleviation unmatched by Western counterparts, China’s stage-setting for urban-rural connections in the 21st century might be unanticipated to the rest of the world. The installation shows how a mix of state and market interventions directs digital transformation, agricultural technology, tourism, and culture in reestablishing the role of, and life in, the countryside.
An AMO / CAFA installation at the Solomon R. Guggenheim Museum in New York from February 20th 2020 - February 14th 2021.
“Perhaps the strongest sections of “Countryside” are devoted to China, with several case studies of villages transformed by new logistics technology and digital commerce platforms. One town has become a leading producer of Ikea-knockoff flat-pack furniture; another has raised living standards by selling organic pumpkins to lodgers in renovated stone houses. (Students at Beijing’s Central Academy of Fine Arts did the research here.) Rural farmers sell apples fresh from the tree on the social network Kuaishou, the country cousin of TikTok. There’s even a replica of the desk of a Chinese provincial official, backed by a film extolling President Xi Jinping’s youth in the Shaanxi countryside.”
Rem Koolhaas Gives Beleaguered City Folk a Trip to the Countryside, New York Times, 5.11.2020
“What, then , is “Countryside”? For starters, it is remarkably Chinese -even when it is in Africa. What initially seems to be veering into dangerous territory of suspicion and othering[…] turns out to be an earnest interest in China’s outsized role in changing the face of the contemporary countryside. From the descriptions of rural revitalization there – via e-commerce company towns, small-scale independent greenhouse farmers living in centralized apartment towers, or the old universal standby, heritage tourism – to a full-scale re-creation of a village-level Communist Party meeting room desk, to a dialogue between two Kenyans expressing their conflicted feelings about massive Chinese subsidies of thei national infrastructure, China figures prominently in some of the best and most informative parts of the show.”
The Countryside in Question by Luke Studebaker In LOG 49, Summer 2020
“There’s also an exploration of how billionaires are buying up land across the globe to exploit and conserve it, and an extensive analysis of how the countryside is being remade in China. What was fantasy during the Cultural Revolution has been achieved fifty years on — and how. Fearful of an emptying countryside, the Chinese authorities have been reimagining rural, small-batch production with so-called “Taobao” villages. Named after the shopping website, they produce almost anything imaginable to order, driven by the immediacy of the internet and the new high-speed train and highway network.”
Rem Koolhaas’s Countryside at the Guggenheim remakes rural life, Financial Times, 21.2.2020
“There is the fascinating tale of Taobao, the super successful flatpack company started by three men in rural China after a revelatory visit to IKEA; a rather fancy bunk bed, shown here in model form, is its best seller. In Kenya, the liberalisation offered by mobile phones from traditional banking is highlighted, while a new train line there, paid for by the Chinese, is celebrated for connecting the country with the city.”
From Koolhaas and the countryside gang, a departure from radical urbanism, The Artnewspaper, 21.2.2020
“I am seeing this show from the lens of being American and having grown up in a capitalist society. Looking at a socialist example like China, that perspective is fascinating to me.”
Architect Rem Koolhaas Explains Why the Countryside Is the Next Frontier, Architectural Digest, 21.2.2020
“The exhibition, put together with five generations of Harvard GSD students and a host of collaborators from Beijing, The Netherlands, and the University of Nairobi, offers a look into some of those back office mechanisms. Some – like a robotic bee and some lively greenhouses – feel familiar. Others – like a map of China’s political structure (extremely timely), and a look at how Qatar dealt with food insecurity caused by political blockades (also timely given our planet’s very real potential to experience global food insecurity) – offer some of that zing of excitement that we have come to associate with Koolhaas’, earlier in particular, contributions to the field.”
Rem Koolhaas contemplates the countryside at the Guggenheim’s latest show in New York, Wallpaper, 20.2.2020
“Countryside then moves away from these governmental models into more polyvalent experiments with nature, technology, politics, planning, and preservation. Many of these we might normally associate with the urban, such as the anarchist community in Tarnac, France that was raided by police in 2008 but is now home to an informal university hidden in the forest. There are also glimpses of rural China, most beautifully Taobao Live, Alibaba’s live streaming channel that allows sellers in the countryside to broadcast their produce and foodstuffs to audiences in the cities. Arcosanti, afro-futurism, and China’s Belt and Road Initiative are among the other kaleidoscopic ways that the narrative extends beyond industrial farming into a host of other social and political spheres.”
Rem Koolhaas sets a global non-urban agenda with Countryside at the Guggenheim, The Architect’s Newspaper Paper, 18.2.2020
“Stephan Petermann’s research into how Alibaba is turning villages in China overnight into specialist manufacturers, connecting producers directly with customers, is another frankly awesome case study on how the rural world is changing at pace.”
Rem Koolhaas and AMO offer a biennial of the new non-urban economy, ICON, 24.2.2020
“The most vibrant chapters center on pragmatic villagers who stumble on ways to reverse rural neglect and depopulation. In the Calabrian towns of Camini and Riace, local officials recruited refugees to rehab crumbling old buildings, revive local schools, and provide a jolt of youth to an aging citizenry. In China, the pig-breeding and plastic-recycling center Dong Feng has reinvented itself as an e-commerce engine, where furniture is designed, manufactured, boxed, and shipped.”
Farm Livin’ Is the Life for Me, Ja? Rem Koolhaas Tries Out Country Life, New York Magazine. 24.2.2020
https://www.guggenheim.org/exhibition/countryside
↑Back to Top